Hike along the old village path to the beautiful village of Gásadalur, which was one of the most isolated villages in the Faroe Islands until a few years ago

The route starts in the valley about three kilometres west of the village of Bøur. The path begins about one kilometre south (or left) of the tunnel entrance. You can see the path, which meanders up the Gásadalsbrekkan.

Gásadalur has been one of the most isolated villages in the Faroes. It is difficult to get to the village by sea and it was not until 2004 that the village was connected to the rest of the island by road when the tunnel was built. The people of Gásadalur used to walk this path when they had to go to the neighbouring villages to trade or for other errands. The helicopter service began in 1983.

The first stretch of the path is steep and runs close to the edge of the mountain. Therefore, walk extremely carefully, but do not forget to enjoy the outstanding view over Sørvágsfjørður, Tindhólmur, Gáshólmur and Mykines.

In 2014, two men managed to climb all fives peaks of Tindhólmur. There is no church in Gásadalur, so the school is used for services. The cemetery is from 1873. Before then, people were buried in Bøur and so the coffin had to be carried over the mountain to Bøur from Gásadalur. The trip was very difficult and the only place that the bearers could rest was at the Líksteinurin (Corpse Stone), which you will come upon halfway through the route.

Further on, you come to the spring Vívdá. There is a story that a baby in Gásadalur became seriously ill and had to be taken to the doctor in Bøur. On the way to Bøur, the baby’s condition worsened, and it was about to die. According to the Lutheran faith, your soul does not gain salvation if you die unbaptised. Therefore, the priest, who was travelling with them, quickly blessed the spring and baptized the baby.

When you continue, you will see Risasporið. There is a legend about two giants. One lived in Gásadalur and the other in Mykines. Once, they quarrelled and the Gásadalur giant wanted to go to Mykines to settle the dispute. He took running leaps along the mountain, took off, and with one leap, he landed on Mykines. He took off so hard that you can see his footprint to this day.

From Skarði, the path twists down the mountainside to the village. Beware of loose stones! The view down to Gásadalur is one of the most beautiful sights you can experience. The small, beautiful village is surrounded by green infield with harsh high mountains. One of them is Árnafjall, which, with its 722 metres, is the tallest mountain on Vágar.

In the village, there are ruins from the Middle Ages, called Uppi við Garð and Gæsutoftir.

The path is visible most of the hike. Its possible to do the hike from either Bøur or Gásadalur, but the route from Bøur to Gásadalur might be a bit more scenic.

Renting a car or booking a guided tour or a taxi are possible options. Please contact Visit Vágar for more information.

Arriving by car
There is no proper parking lot in Bø by Áardal. Therefore, it is recommended to park in Gásadalur. There are a few smaller parking lots by the mainroad to Bø. From here you will have to walk the 400-metre-long gravel road that starts 350 metres outside the entrance of the tunnel. At the end of this road you will find a big sign and signposts that lead the way.

Renting a car or booking a guided tour or a taxi are possible options. Please contact Visit Vágar for more information.

This hike is suitable for children 10 years and older. The hike up from Gásadalur is quite steep and rugged with many loose stones on the path. This part is unsuitable for smaller children. On the hike up from Bøur you pass the steep edge of Bíggjarskor.

Difficult - The path is mostly easy to walk on, but the steep hill up from Gásadalur is challenging – especially for those who have a fear of heights. The trail is also challenging close to the edge of Bíggjarskor where it is very steep. Be careful and stay away from the edge.

The walk up from Gásadalur is quite steep with loose stones and rocks on the path. The terrain walking up the “Gásadalsbrekkuna” (Goosevalley Hill) from Bøur is grass covered and good for walking but be aware. The path is quite steep when you get closer to the edge of Bíggjarskor. Apart from a bit of gravel, the path in the valley of Lírabergi – between Gásadalsbrekkuna and Á Skarð – is good.
Weather today 3day forcast 7day forcast 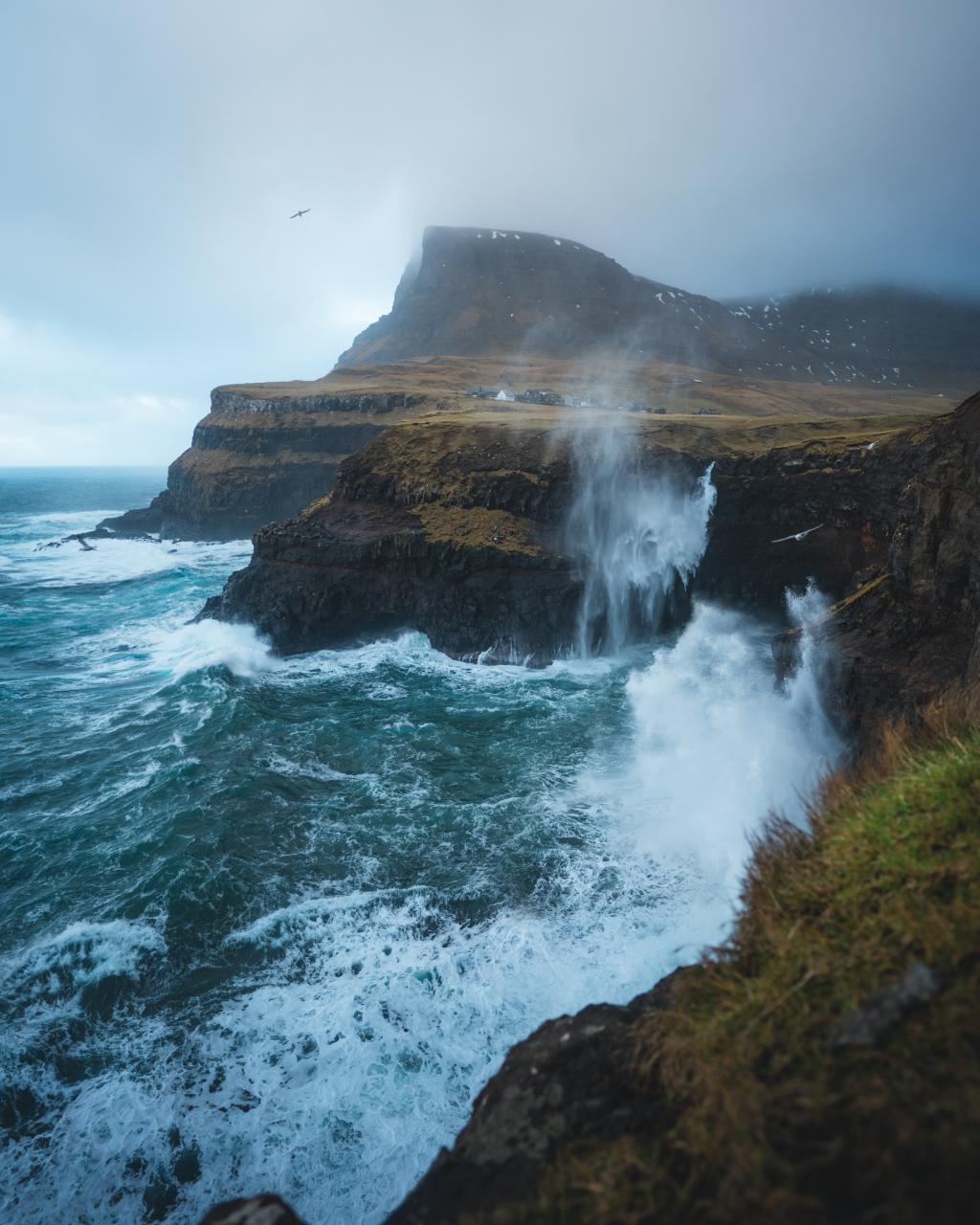 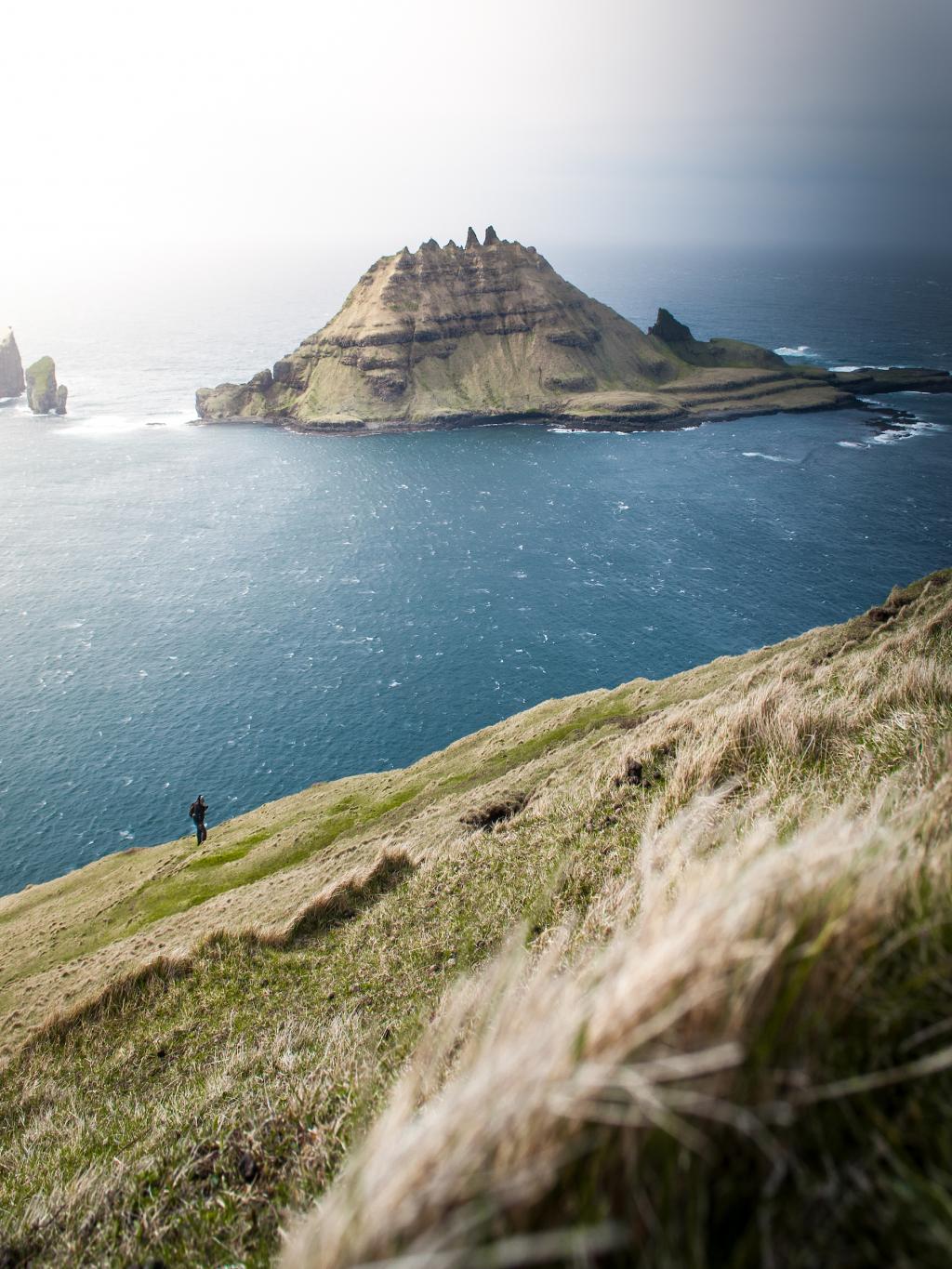 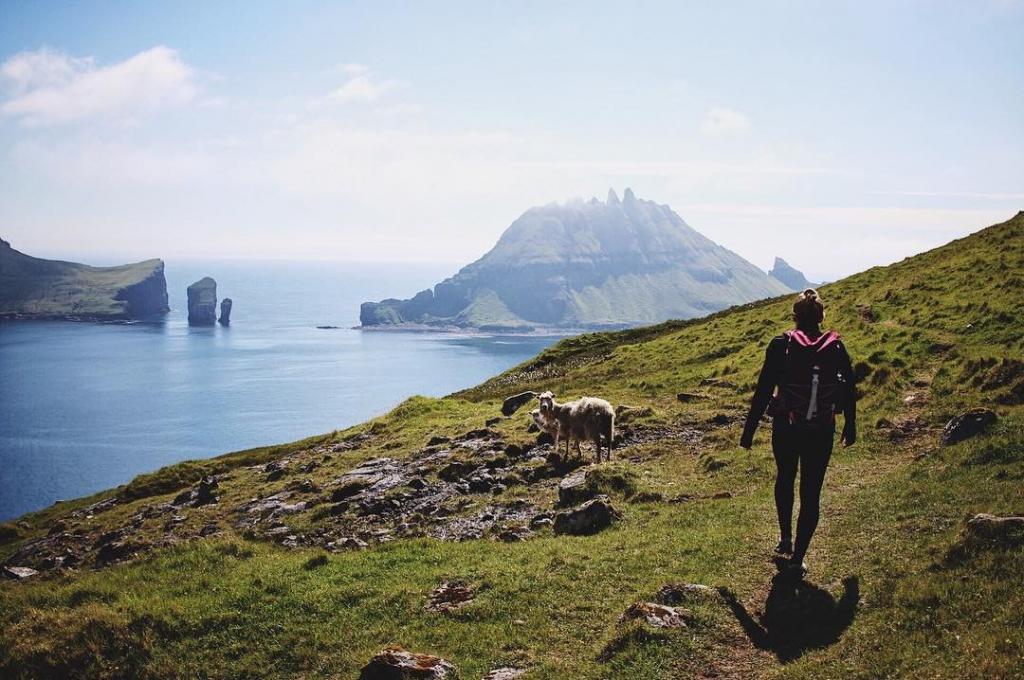 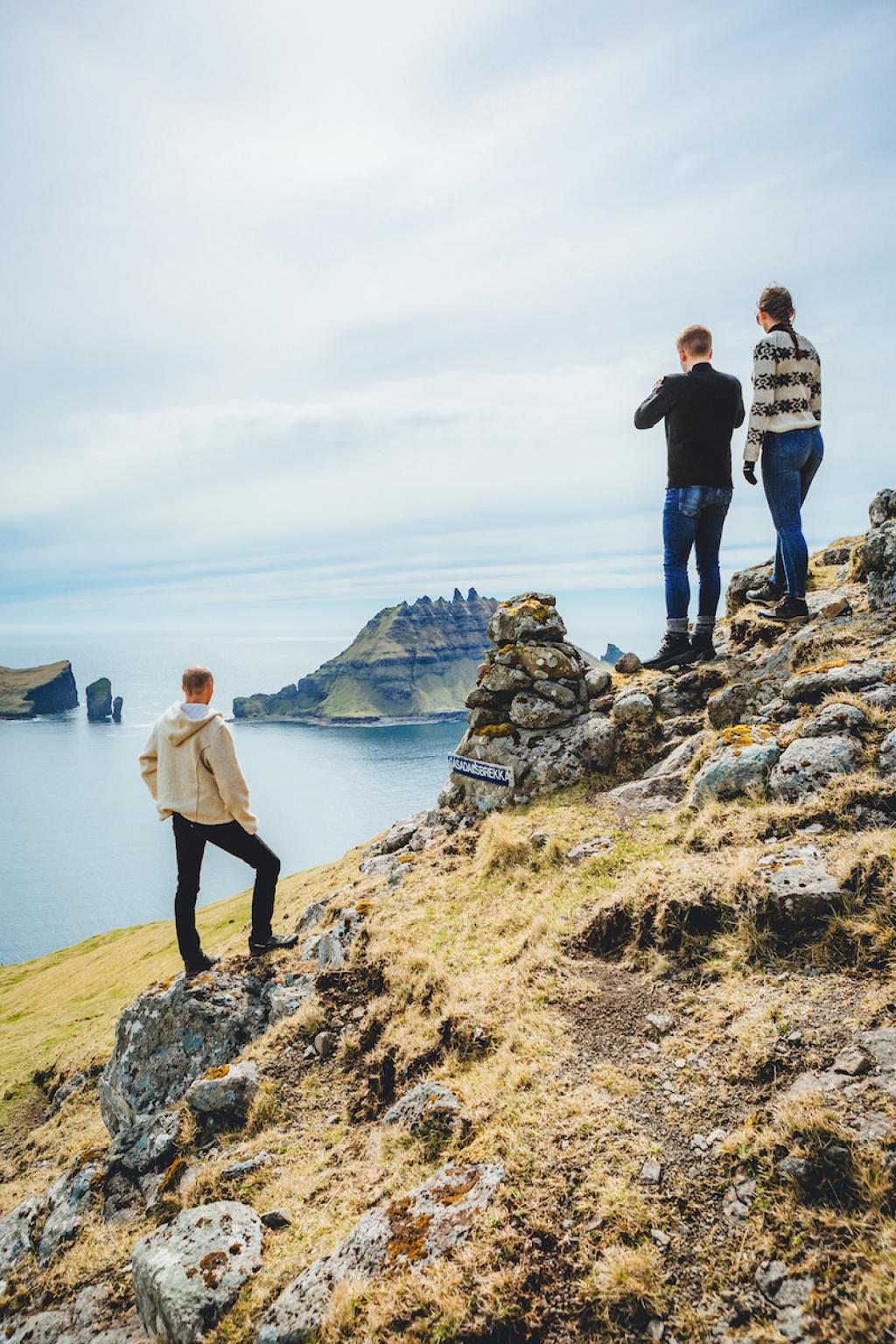 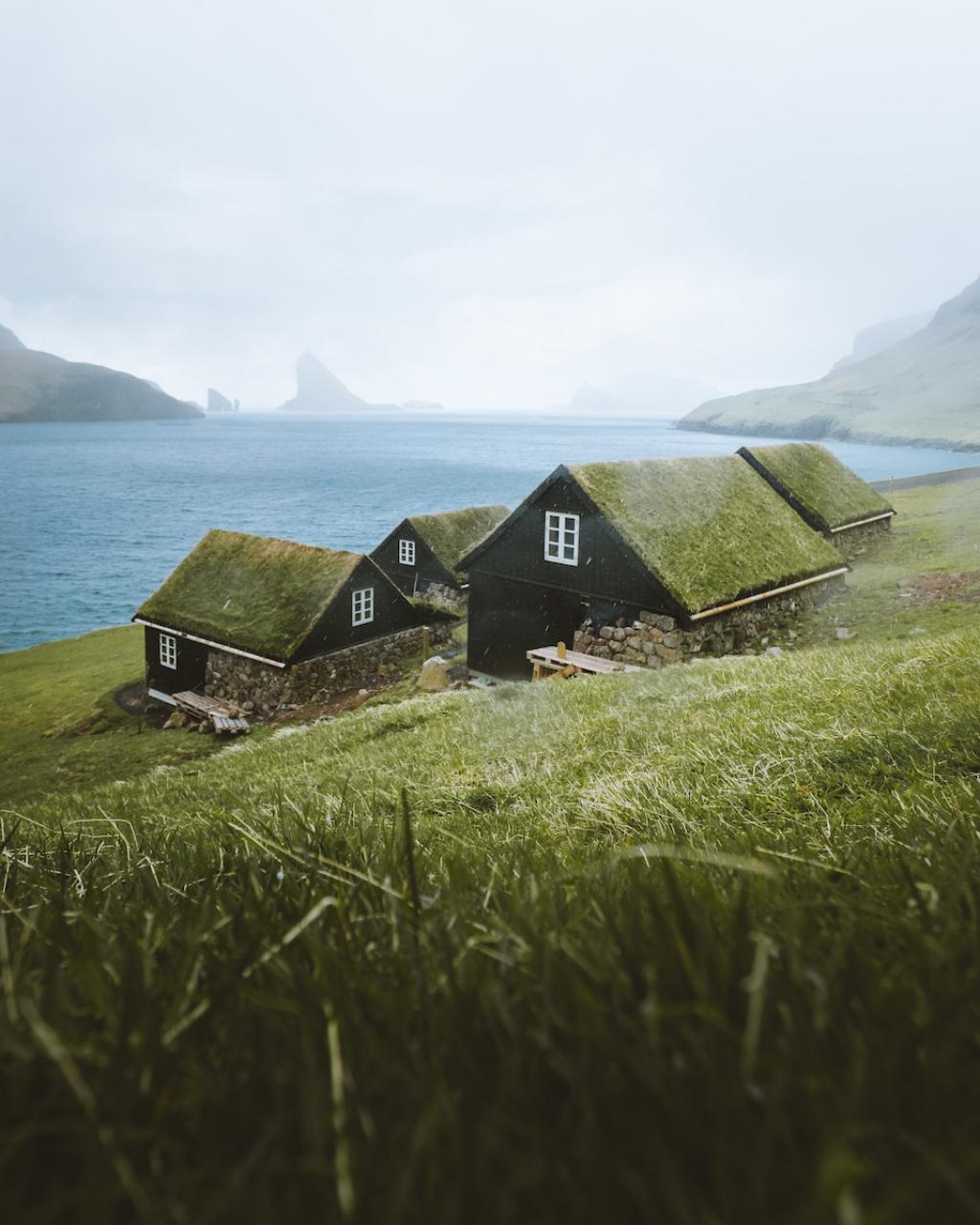